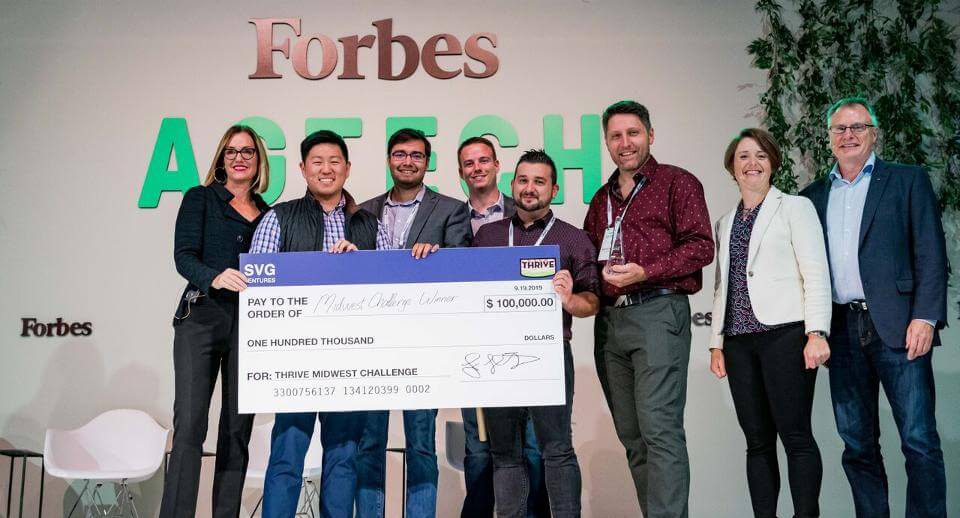 Animal Husbandry is not just a term that industry professionals like to throw around, it’s a pork producer’s purpose. Here at SwineTech, we are dedicated to supporting this purpose by improving swine health using these three pillars within the Pork industry: Animal Welfare, Productivity, and Sustainability. Using these key fundamentals to guide and lead us, our team has been diligently and passionately circling the globe speaking to the industry’s top minds, and gathering insights. The adventure has been rewarding and informative, and we are excited to share our story.

In September 2019, SwineTech had the opportunity to meet with Steve Forbes at the Forbes AgTech Summit, and then embarked on a two-week trip to China that included stops at the US Embassy for a meeting with the USDA and countless other speaking engagements and conferences. During this trip, Rabobank, the world’s largest agriculture-based lender reported that China’s pork production will fall by 10%-15% in 2020, on top of the 25% drop in 2019. Rabobank also expresses the opinion that China’s swine inventory has decreased by half in 2019 and is still falling.

SwineTech agrees with Robobank’s findings and because of our passion… we dove even deeper. Here is our story…

In September, The National Pork Board hosted the inaugural Swine Innovation Summit in Indianapolis, as a special event leading up to the Forbes AgTech Summit Indianapolis. SwineTech and other industry leaders from across North America attended the Swine Innovation Summit as part of their ongoing support of AgTech innovation and the THRIVE Midwest Challenge. The National Pork Board and SVG Ventures/THRIVE are founding partners of the Swine Innovation Summit, and partner with AgriNovus Indiana, Corteva, Elanco Animal Health, Land O’Lakes and Purdue University to provide networking and showcase opportunities in the Midwest for innovative startups like ourselves.

“Indianapolis was a great opportunity to meet with many US pork producers as well as the National Pork Board. It allowed us to collaborate and collectively work towards transforming the industry as we know it today. It was also refreshing to be surrounded by so many innovative minds focused on how we can feed 9 billion people by 2050.”

“Today’s consumers literally carry supercomputers in their pockets and have access to information – both accurate and misleading – that they leverage in making on-the-spot purchase decisions,” said Andy Brudtkuhl, National Pork Board’s director of emerging technology. “In the span of a few short hours, we intend to educate today’s pig farmers on what they need to know and how they must adapt to the changing world in which we live.”

In between the two events in Indianapolis, SwineTech and the National Pork Board were invited to an exclusive breakfast event where Mr. Forbes discussed the opportunities that exist within agriculture today, and how free trade can play a big part in ensuring the success of modern agriculture. Thanks to this event, SwineTech had the opportunity to speak with Forbes about an upcoming meeting with Ambassador Branstad at the US Embassy in Beijing, China. He was highly interested in what the US is doing to ensure a win/win agreement with China. Additionally, he encouraged us to ask how the US might be partnering with our allies throughout trade negotiations with China.

During the Forbes AgTech Summit, SwineTech had the opportunity to tour Corteva, Becks Hybrids and compete in the THRIVE Midwest Challenge, against some of the Nation’s most successful agtech startups. The THRIVE Midwest Challenge is a pitch competition for startups developing biotechnology, livestock, and animal health and digital crop technology relevant to Midwest farmers and producers in general. The THRIVE Midwest Challenge provides startups with an opportunity to showcase their solutions before an audience of investors, corporate partners, and local and national media. We were fortunate enough to have the ability to present our “pitch” and walk away with a THRIVE-Forbes Innovation Icon Award.

“This has been an amazing opportunity and I couldn’t be more thankful to Forbes, THRIVE, and the National Pork Board for believing in and supporting us as we continue to grow. In 2015 this was just an idea and now we are working with many of North America’s largest pork producers and are protecting more than 1,000,000 piglets!”

SVG Ventures Founder and CEO John Hartnett and ForbesLive SVP Sherry Phillips presented BinSentry and our company, SwineTech, with the awards during the second day of the summit.

“We are delighted with the evolution of the Forbes–SVG Ventures partnership in advancing the future of Food and Agriculture,” Hartnett said. “This year, the THRIVE Midwest Challenge Program received eighty-nine applications from twenty-six countries. Five startup finalists were selected to pitch live on stage.” John Hartnett affirmed, “The winners, SwineTech and BinSentry, provide significant technological advancements that will play a key role in optimizing operational efficiencies for pork producers and Midwest farmers.”

“The 2019 THRIVE-Forbes Innovation Icon Award honors those helping to bring solutions to the marketplace that will move the world forward,” said Sherry Phillips, SVP of ForbesLive. “SwineTech and BinSentry are both gamechangers for the industry and true innovators. They’re incredibly deserving of this honor and we look forward to showcasing them at our Under 30 Summit this fall and in an advertisement in our magazine.”

A Guest, a Panelist, and a Speaker. Our China Experience.

This momentum led us to our trip to China, fueled by a dedication to help pork producers in China that are currently facing major losses due to African Swine Fever (ASF). Our first stop was EuroTier – the world’s leading trade fair for animal production and husbandry. In China for the first time, it brought the global animal health and production platform to one of the most prominent animal husbandry hubs on the planet. The new show was an ideal setting for agricultural business leaders and innovators like us to learn about the challenges and opportunities faced when entering a rapidly growing livestock market, and learn how we can help shape the future of animal production in China.

Following our experience at EuroTier, we traveled to Beijing to attend Alltech’s 25th Anniversary of being in China. Since entering the Chinese market, Alltech has established a bioscience center and manufacturing facility within the country, and has 8 research alliances with 6 of the country’s major universities. During this celebration, Alltech CEO Dr. Mark Lyons talked about Alltech’s initiative called Planet of Plenty. A new website, PlanetofPlenty.com, provides examples of agricultural methods that can improve the environment as well as inspiring stories of the people and technologies making a planet of plenty possible.

“With the adoption of new technologies and management practices, and, most of all, human ingenuity, we believe a Planet of Plenty is possible, Our Planet of Plenty vision propels our founding ACE principle into a new world of possibility, where anyone and everyone can make a positive impact on our shared planet.”

“Agriculture is the only industry that can sequester carbon through its primary mission,” said David Butler, Alltech sustainability manager. “There are several low-tech management practices and high-tech innovations that can put carbon back into soils and forests and produce more food in the process.”

For this event, Dr. Mark Lyons and the Alltech team, invited our very own Matthew Rooda to speak on a panel discussing, Digital Agriculture & Food, and Its Future Managing Public Agribusinesses in the Age of Information Tech. Matthew was accompanied by, Frank Sun, the Executive Secretary-General of CAFA, Dong Ning, the Director of the Financial Technology Research Center of Peking University, and Lin Jinjiang, the General Manager of Tongdun Electronic Technology.

At the US Embassy in Beijing

Our last exploratory and fact finding stop on our trip led us to the US Embassy in Beijing. Securing a meeting with the USDA’s Office of Agricultural Affairs was very important to us, as it helps keep us up to date with the ongoing US-China trade relations, as well as the status of the pork industry in China. As we look forward to 2020 and beyond, several factors will influence how and when China’s swine inventory will recover. As the global leader in pork consumption, we feel it’s important to keep a pulse on their gains and losses… especially as it pertains to ASF.

Despite being one of the leading producers and consumers of meat in the world, China is still challenged by the ever-rising levels of local consumption (our findings tell us that 62% of protein consumed was pork in 2018). The current focus of the Chinese pork industry is on environmental sustainability and growth in new (remote) areas of the country, especially regarding converting swine population density from backyard farms to large-scale production farms.

Key factors we found include:

While it is unrealistic to forecast how these factors will affect production and demand in 2020 and beyond, based on the information and market trajectory we were able to understand during our two weeks in China we believe their swine inventory should begin to stabilize in early to mid-2021.

Since returning from China, SwineTech is receiving inbound offers from producers in China and 15 different countries across 5 continents. We are currently kicking off the inaugural SwineTech Swine Veterinary Advisory Council to assist in the progression towards a major expansion to the Chinese marketplace. We are excited to continue our working relationship with China and the world’s largest and best producers.

The Netherlands: Putting Everything Together

Our CEO Matthew Rooda had the opportunity to speak at the Amsterdam Animal AgTech Innovation Summit shortly after our trip to China. Boehringer Ingelheim, Zoetis, Merck, Sainsbury’s, Cargill, PIC, Allflex, Cultivian Sandbox Ventures, Anterra Capital, Finistere, and many more attended this global meeting to better understand how innovation is changing the pork industry today and how together we can fuel/fund this transition. The very first panel spent an hour discussing the push to remove antibiotics from production. Later, PIC spoke about gene editing and the ability to eradicate the PRRS disease. Cultivian, Anterra, and others spoke about funding strategies in an ever-changing animal health sector.

“The traditional way of approaching animal agriculture has changed significantly. Today, the way I see it, our old technology is not going to satisfy either these food crises, disease, the expanding population or the environmental concerns we have around how we produce food. Animal agtech is the solution of the future – a solution that we don’t have today.”
– George Heidgerken, Global Head of the Strategic Business Unit  Livestock (Boehringer Ingelheim)

SwineTech takes pride in our ability to be the eyes and ears in the farrowing house by protecting tens of thousands of litters each year. Through our continuous efforts to improve the productivity, sustainability, and overall welfare of the pork industry we hope to one day digitize agricultural data, offer advanced real-time analytics, complete traceability, and provide applications for better management of farrowing operations across the Globe. We are excited and confident for what the future holds in regards to the pork industry and we are excited to play a role in it.  Feel free to reach out if you would like to join us in changing the way we look at pork production forever!